Plant a tree in memory of Elmer
An environmentally-friendly option 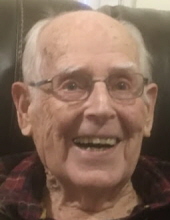 Elmer was born August 27, 1924, in Cleburne, Texas, the younger of two children born to Elmer H. Seale Sr. and Linnie Marie Seale. When Elmer was three, the family relocated to the Ft. Worth area when his father began working for Lone Star Gas Company. He attended Southwestern Junior College in Keene, Texas, as a member of the Class of 1943. However, he was not able to graduate with his class because he was called to help with the war effort.

He was drafted into the Army in April, 1943. After basic training, he was assigned as a clerk-typist in the dental clinic at Sheppard Field in Wichita Falls, Texas. Wanting to have a more active part in serving his country, he applied for and was accepted into paratrooper training. He began jump school at Fort Benning, Georgia in March, 1945, and upon completion was assigned to the 11th Airborne Division. The war ended before the Division was needed in combat, and it was sent to Sendai, Japan as one of the first occupational forces. Elmer served in Sendai until March, 1946, when he was honorably discharged.

In the fall of 1946, he enrolled as a pre-dental student at Union College in Lincoln, Nebraska. Within days, he met Joyce Erickson, a student assistant in the biology lab. They were married in Brainerd on September 6, 1947. After graduating from Union in 1951, Elmer earned his DDS degree from the University of Nebraska in 1955. The family moved to Bassett, Nebraska, where he served as the small town’s only dentist for four years. Feeling the desire to live close to extended family, they moved to Brainerd in 1959.

Elmer practiced dentistry in Brainerd from 1959 until his retirement in 1987. He loved his work and always felt that his patients were also his friends. After retiring from dentistry, his interest in electronics led him to accept a part-time position at Zercom, where he became leader of the line that made temperature control boxes for refrigerated trucks. This different career was also a rewarding period of his life, and he retired for the second time in 1992.

Elmer pursued many hobbies over the years, including ham radio, gun collecting, hunting and fishing, basket weaving, oil painting, computers, and cooking. He was an active member of the Brainerd Seventh-day Adventist Church for 60 years, was a past member of Lion’s Club International, and served 15 years as a transport driver for Interfaith Volunteers. His greatest joy, however, was spending time with family and friends.

Elmer was always proud to call Texas his home state, but Brainerd quickly became his beloved home town. He lived independently for nearly 60 years in his house on N. 7th Street, which was purchased in 1959 when the family moved to Brainerd. He relocated to Marion, Iowa at age 94, when health issues prevented him from living alone without family nearby.

Elmer’s life of faith, integrity, perseverance, and humor was a blessing, and he is deeply missed. He is survived by two children, Rosalyn “Rosie” (Don) Hilliard of Cedar Rapids, Iowa; Stuart (Sandra) Seale of Anthem, Arizona; daughter-in-law, Kathy Seale of Springfield, Missouri; five grandchildren and 4 great-grandchildren, Jonathan (Jenee) Hilliard, Levi and Daphne of Vancouver, Washington; Jameson (Vivian) Hilliard and Ethan of Lincoln, Nebraska; Ryan (Erico) Seale of Glendale, California; Jordan (Leigh Anne) Seale and David of Spring, Texas and Lauren (Brad Farnham) Seale of Taos, New Mexico. In addition, he is survived by his nephews and niece, R. Scott Daarud (Suzie), Steven Daarud (Connie), and Cheryl Daarud Boulais (Terry) as well as 3 grand-nephews and 3 grand-nieces. He is also survived by many dear friends.

He was preceded in death by his wife, Joyce, on February 5, 1996; parents, Elmer and Linnie Seale;  sister, Helen Simmons; parents-in-law, Reuben and Rosabelle Erickson; sister-in-law, Gladyce Erickson Daarud and her husband Richard; and many close and dear friends.

A Service for Elmer is planned for 11:00 a.m., Sunday, July 25, 2021, at Seventh-Day Adventist Church in Brainerd.  Family and friends are welcome to gather one hour prior to services and to stay for a luncheon that will follow interment at Evergreen Cemetery in Brainerd.

Plant a tree in memory of Elmer by clicking here.
To send flowers to Elmer's family, please visit our floral store.

A service summary is not available

Plant a tree in memory of Elmer
An environmentally-friendly option

Plant a tree in memory of Elmer

1 tree planted in memory of Elmer

A Memorial Tree was planted for Elmer H. Seale

Plant a tree in memory of Elmer